From where I was seated, it seemed that no one cried at my father’s funeral.   It seemed to me that it was stoicism all the way.  Most of them were pretty good at it.  My 12-year-old nephew was looking a bit shaky for a while, parents wondering whether he would ‘make it’ to be part of the party to walk the casket it out.  And I can tell you that I was definitely shaky.  I was all but crying, but everyone was so stone-faced that I was determined that I wouldn’t ‘fall apart’.

Back when I was about 12, it had been predicted that I would never cope with my father’s funeral.  [Please don’t ever make such a prediction on your daughters!!!]  That prediction was very much on my mind.  It was made when I was crying inconsolably at an airport.  My father was leaving for a six week trip overseas.  I was angry that the prediction had ever been made, and was always determined to be just fine at my father’s funeral.  I was determined to ‘tough it out’

It’s not that family members didn’t love my father.  It’s just the sort of people they (but admittedly not me) are.  I was determined not to be the only family member crying.  It was exactly what was expected of me, and I wasn’t going to go there.

Until we, the immediate family, were alone outside in the driveway of the chapel.  The hearse was pulling away from us, with my Dad in it, and that was the point where my stoic determination gave way… and I bawled. I was a complete and utter mess by the time other people made it out of the chapel.  Makeup everywhere, panda eyes, but I was beyond caring.  That hearse had just ‘stolen away’ my Dad! I couldn’t be tough anymore.

As for my nephew, he ‘made it‘.  No tears and he helped, along with his father, brother and others important in Dad’s life, to wheel the casket out.

That was nearly four years ago, and lately I have been thinking.  I wish I had cried at the service.  I wish I had been inconsolable.  It’s how I felt, after all. For my father was the most important person in my life.  As well as being my parent, he had become my best friend.  But I was too concerned at what other family members would think.  I was determined that their prediction of me all those years ago would not be well founded.  But damn it, he was my father and my best friend and he deserved my tears.

What was I thinking?  Well, most people there that day would have known that my father and I were very close but I admit that aside from that, and stoicism of other family members, I feared being judged, because most people there also knew I had a mental illness (or three).  I was expected to fall apart on so many grounds but I wish I hadn’t been too busy toughing it out to really mourn my Dad.

In time I did mourn his passing, but it was alone, where no one was going to judge me.  Actually though, I think that’s where I really begun to tough it out.  I faced my feelings.  I grieved my loss.  I realised that both my father and friend were gone, but that I would be okay. 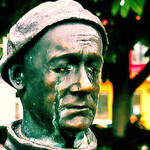 Today I read a really interesting article (One Man’s Quest To Have Male Crying Socially Acceptable by Andrew Reiner). As the title suggests it is about the challenging issue of men being able to cry and be socially accepted when doing so.  It’s a very good article from that male point of view, but Reiner really made me think in the last paragraphs when his son was ‘allowed’ to cry after being told by another parent to ‘toughen up‘. In being encouraged to cry if that was what he needed, he was ‘toughing it out’ in his own way.  That made a lot of sense to me.  Not having children, I wasn’t thinking of it in terms of a child, but rather in terms of myself.

‘Toughing it out‘ at my father’s funeral was what I thought I was doing when I was determined not to cry.  But actually it was tough to be alone with my tears and my grief.  I faced my loss.  It’s only now that I realise that my facing it in that way, I was able to move forward.  Yes, I still miss my Dad, pretty much every day, but it’s not crippling like it could have been.

Doing it the way I did still brought me the healing I needed.  If I hadn’t, I could have fallen back into depression.  Considering the circumstances of Dad’s death, I could so easily have done that but eventually facing my grief allowed me to heal.  Like the expected ‘falling apart’ at the funeral, falling back into depression was also expected by those around me.  I didn’t go there, thankfully.

Let me be clear though.  I wish I had been able to cry without negative expectations on me.  I am thankful for me that I didn’t end up depressed.  I found a way through anyway.  But perhaps most importantly others’ expectations of how I might falter just don’t matter as much to me now.  When I feel tears, I hope I can always let them flow. I hope I can express my emotions when I need to.  I believe that is ‘toughing it out‘ for me.

“Heaven knows we need never be ashamed of our tears, for they are rain upon the blinding dust of earth, overlying our hard hearts. I was better after I had cried, than before–more sorry, more aware of my own ingratitude, more gentle.”

22 thoughts on “Toughing It Out”