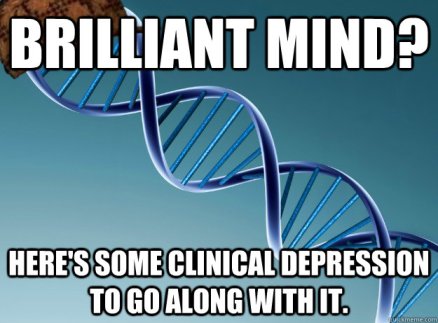 It has been said that a beautiful mind is a terrible thing to waste. And yet, it would seem like every day I live is just one step closer to wasting this mind of mine.

Born with a gifted brain, I once was marked for success, like so many other gifted kids around the world. One would think that a better brain could only make its owner’s life easier. But it is the most counter-intuitive thing in the world.

Gifted children have a lot of problems adapting to a world where they stand out by simply existing. School for them is infinitely boring. Classmates are boring. Teachers are boring. It’s hard to relate to a teacher when it is so obvious for you-  at age 7, that you are way smarter than them. Take my word for it.

Gifted children more often that not, quickly become outcasts. Either they go inward, like me, ignoring everybody and living a very quiet, introverted life or they become arrogant, confrontational or even destructive.

And then, mental illness kicks in.

Once, the following construct was a great source of grief for me : If I am so smart, why can’t I fix myself? And the fact that I have an MD degree didn’t help at all. That’s how I lived my 20’s and 30’s. It tortured me. But when one is genetically marked for mental illness, little can be done without the help of pharmacotherapy.  It is the only way to correct damaged or faulty pathways. For now, anyway. I have high hopes on gene therapy. I hoped to one day work in that field but alas, that will never happen.

However, there’s no solid data for the high intelligence-mental illness association. The following quote says it all:

Anecdotal and biographical reports have long suggested that bipolar disorder is more common in people with exceptional cognitive or creative ability. Epidemiological evidence for such a link is sparse.

The former is the first paragraph of the abstract of an article published this month* in Molecular Psychiatry: Is bipolar disorder more common in highly intelligent people? A cohort study of a million men. But the quote may as well be applied to Clinical Depression and other disorders.

Yet another recent article on the relationship between depression and high intellectual potential in children, concludes that:

based on these different levels of analysis, it appears that heterogeneity of mental functioning in children with high intellectual potential is at the centre of the creative process and it has related psychological vulnerability.

In other words, it looks like there is some correlation but nobody really knows why or how. In the mean time, a lot of gifted people – my son and I included, struggle with mental illness. And it would seem that history is backing me up on this one.

It does seem to me that goes like this: Crap, we gave her too much of this so we better add some bad things or else it will be unfair.

But I’ve long known that I pretty much got the worse from that scumbag genetics. How is one supposed to not waste a beautiful mind when one is in so much constant pain, both of the physical and psychological kind?

I seem to have lost the battle. This beautiful mind has been wasted.

I have failed the test. I will diminish, and go into the Darkness, and remain a lost little girl.

* By the time this post is published, it will actually be last month, on February, 2013

39 thoughts on “Intelligence and Mental Illness: A beautiful Mind Is a Terrible Thing to Waste”