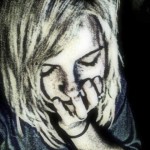 From the time I was young, I always knew that I had certain strengths and weaknesses. This is true for everyone. Personally, I’m no good at math, but I’m very strong in the creative arts. I am a born procrastinator, but I’ve never failed to meet a deadline without good cause. I’m always early for everything, even though I rush out the door as a disorganized mess.

Putting a name on an ailment doesn’t make the symptoms any easier to handle. And sometimes, those symptoms put people through a series of gauntlets. I call them, “The Life Olympics”.

In Part One of this series, I’d like to address certain social difficulties that may be experienced. I’ll start off with a personal anecdote to illustrate some of this.

My husband and I have been blown off by many of our friends repeatedly. They just find better plans. A date, an outing, going to the bar, a new boyfriend / girlfriend, etc. I get it. As much as it hurts sometimes, I realize that many of our single friends would rather do anything than spend the evening watching Spongebob with a toddler, and then sit around the house with a married couple. It’s not an exciting prospect.

C.S. and I made plans to hang out with a non-married couple that are very good friends of ours. When my mother-in-law offered to take our son for the night, it was definitely Date Night! So, we cancelled plans with the other couple. Can you blame us? C.S. and I just wanted to do something fun to reconnect! They apparently took great offense because when we tried to reschedule, we got the run around.

My bullshit radar is very finely tuned. It comes from years of dating sociopaths (another story for another time). And those two don’t even come close. I caught that one before the second word even came out. So, C.S. and I got to talking and he said, “We need new friends.” I replied, “To tell you the truth, I don’t really want friends.”

I’ve never usually had problems keeping friends. I am very real, very friendly, and I give until it hurts. I am free with my affections. And I’m always the first to forgive. I expect the same kind of reciprocity, and I normally have it. Until recently.

I am sensitive and reactive. People who have bipolar disorder usually are. I do not take disappointment or criticism well. I will not have someone disrespect me or my family in our home. I have extreme difficulty forgiving people who intentionally hurt me or my family. And if sense that someone is intentionally alienating me, I will cut them out faster than you would believe.

I have enough attitude, bullshit, and baggage of my own. I’m not taking anyone else’s. Especially from people who call themselves “friend”.

Having bipolar disorder and anxiety makes friendships a lot more complicated for me. Meeting new people is hard. Opening up to people is tough. I only tell select people about my mental health, and that’s after I’ve known them awhile. And even then, I don’t expect them to truly understand.

So if I’m having an episode, I do everything to keep friends out of potential crossfire. Most people consider those actions as alienation and blowing them off. That’s not the goal; the goal is to prevent anyone from being harmed by action or inaction that I may not be aware of or in control of! I have attempted to explain this to friends that are aware, and they really don’t get it. Either way, I’m still hurting everyone involved.

Worse, I’ve had “friends kick me to the curb due to symptoms. My own sister, who also has bipolar disorder, and I speak only once a month now. We used to talk every day and visit once a week. We were best friends growing up, we have children of the same gender and age, and we live in the same zip code. Other “best” friends couldn’t handle it. One of my best friends was my next door neighbor when we were growing up. Another, I practically lived at her house in my teens. When it was good, it was fantastic. When it was bad, it was catastrophic.

I’m not giving up hope just yet though. There are still two friends that I’ve managed to keep, Jay and HB. Jay and HB know the real deal. They’ve seen me shine and they’ve seen me fall. They’ve taken calls and made visits in the middle of the night. They know how to encourage me, console me, and very kindly throw down the flag when I’m considering something irrational.

Maybe these friends are few and far in between. And maybe I have to have a shell. It might be more difficult, but hey, it’s probably worth it!

So tell me, what are your difficulties?